The current recommended version of the pack for players and builders is the community-fixed version, found here: https://neverwintervault.org/project/nwnee/hakpak/original-hakpak/beamdogs-hd-art-pack-community-fixes

Please report bugs with the community version here on the wiki (if you have a wiki account) or on the vault Discord: https://neverwintervault.org/chat or on the Vault page above.

The Beamdog HD Art Pack is a large amount of upgraded HD models for most Neverwinter Nights base player/NPC appearances, and several weapons. The pack includes upgraded high quality textures and models for:

These are overrides - they replace the base game models - and do not typically include additional models excepting a few minor weapons.

Improvements the project group has made:

The pack has got some known issues, many of which will be fixed in future versions:

Out of scope of this particular project is adding new overrides or drastically changing the appearance of these ones. A new project Overhaul will carry on this with new HD and fancy mapped (PBR) content.

The 'userpatch' installation of the community version of the HD Pack is recommended. Follow these steps to install the HD Pack:

The above 'userpatch' installation is recommended because it is much easier to upgrade when a new version is released and is easier to remove the pack from your system altogether if you want to. Also, you can very easily enable and disable the pack (simply by renaming the userpatch.ini file), and unlike the 'override' installation doesn't leave 14,000 or so loose files on your system, possibly mixed in with other files you might have put in your in your override folder.

You can also use the "Low Quality PLT" version to improve load speed at the cost of PLT texture quality. Most people won't notice this unless zoomed in. To do this replace the userpatch.ini with the one in the download on the Vault, and put the hakpack in the zip in the patch directory.

Alternatively, you can use the 'override' installation which involved just dropping all the ~14,000 loose files of the Pack into your \override folder:

Mainly useful to know for modders, cloakmodel.2da is the only 2da file now included in the pack, since other changes were redundant (not override) or did nothing (identical files) or were very minor (halfling weapon size change from 0.8 to 0.75). Download the 1.0 file pack if you need these back.

It somewhat works - further investigation needed for a better release (userpatch.ini version would be best). 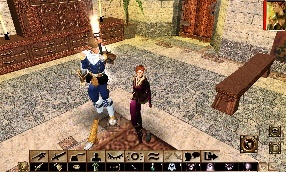 See also HD Pack Contents Assessment for some more high level views of some issues/problem files and lists of files (incomplete but being worked on where needed).

See also Fixed Bugs can be used on each release to clear the list, so this list doesn't get insane.

Note bugs must have in-game issues not just toolset issues. The toolset is still dumb when it loads phenotype textures so some appear drastically off / bad and this can be easily misreported.