(It's probably best to start this review with full disclosure. I, along with @Olivier_Leroux, have created this updated Kids' Module page. I've reviewed all the other modules but obviously this one presented difficulties as I created it! Thankfully, @Dustin_Offal stepped up and played it through, afterwards giving me extensive thoughts on the module. Not wishing to impose on his good nature further I've taken his thoughts and added some screenshots from the module to come up with this review so this completes the kids' modules I'm been aware of so far. Although I've paraphrased him, the thoughts are his. If I've added any of my own I've put those in italics and brackets so you know where you stand !

A final word about the combat before you start reading. Ruby isn't invulnerable and can be killed, as can Grandad and their other animal henchman. However, I did make her fairly strong with Grandad to bear the brunt of most of the fighting while she casts spells from further away. There are also one or two other things which should help. This is why I've recommended  it be played by kids over 8. By the time my granddaughter tackled it ( along with me doing most of the combat) she was already used to Diablo2 which she was allowed to play online with me for a while during lockdown and was already a level 20 Sorceress ! She also took Grandad's demise one or two times while we played much better than I would have liked . . .) 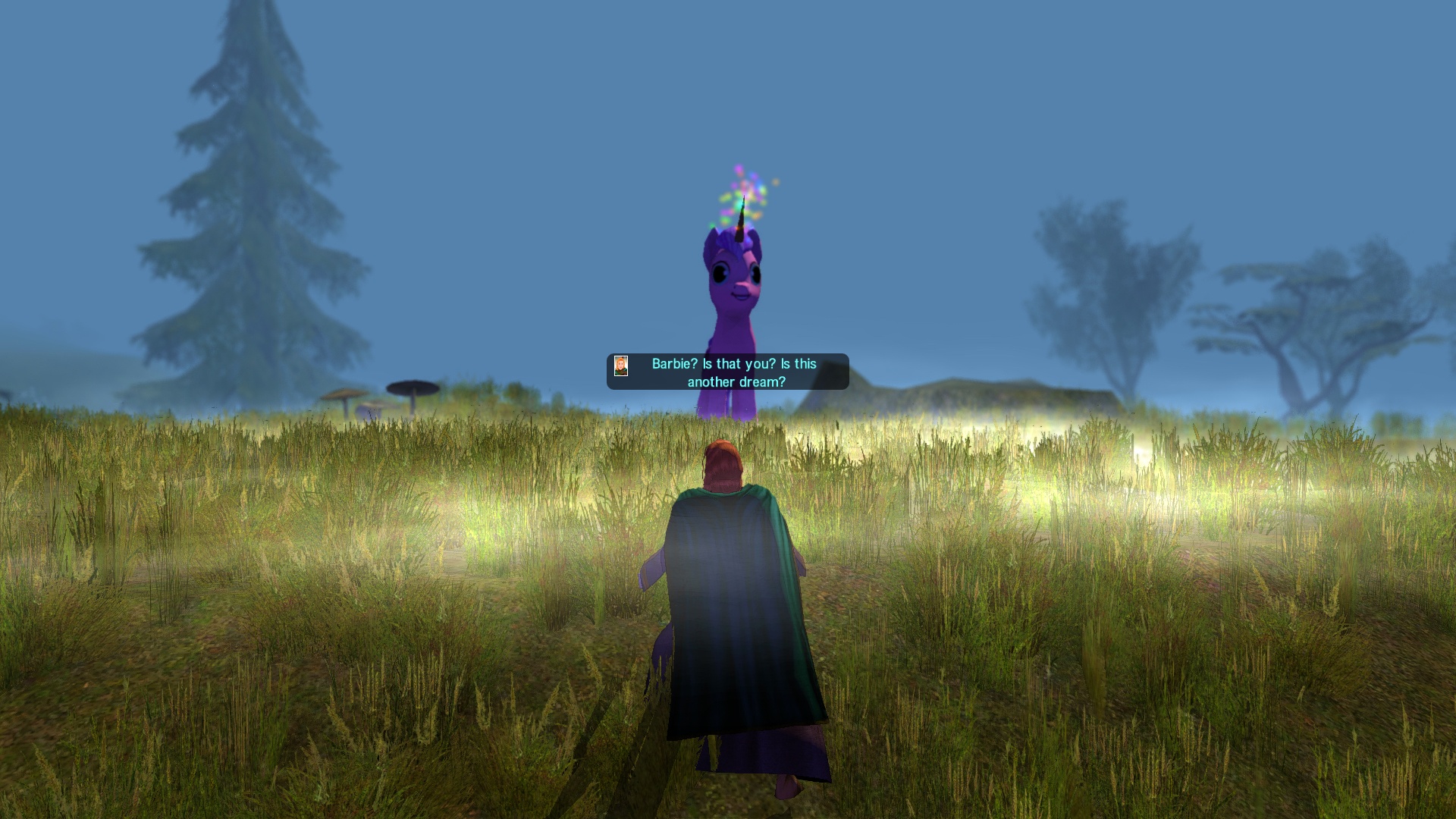 This module is aimed at a higher age group than most of the other modules in the kids' pages so far. I created it for my granddaughter who was 8yrs old at the time. She enjoyed it but was slightly intimidated by the combat so I had to do that for her most of the time. I'd put the ideal range at 8 upwards. She's now 10 and able to move with the mouse much better, the major change being that she can now run behind grandad and he dies more often!

Ruby lives with her Grandfather, who thinks he's the best wizard in the land(!) and Grandma on a farm in the middle of a wood. They have a Unicorn, Barbie, who lives in a field beside the farm. Without giving too much away, Barbie is kidnapped so Ruby and Grandad set off to find her. On their way they meet a series of oddball characters and endure a few combats.

The module is a reasonable length, covering quite a few different areas. It has an unusual opening in that there is a titles movie, followed by a gorgeous opening cutscene. When Ruby discovers Barbie is gone she immediately tells Grandad and they set off. ( The style of most of the conversations is a little different from normal in that Ruby voices her own part as does Grandad. The two audio files are put together so when you click on Grandad to speak, he says some thing and Ruby replies without you needing to click on her reply. You only need to click to continue the conversation.)

As we go through the module the story is quite a strong element and will suit those who like characters a good narrative. There are a few small niggles in the game such as when the magic tent is put up and the next day I was left wondering why Grandad wouldn't speak to me until I realised that the module is intended to be quite linear and world wide exploring, although possible, isn't actively encouraged.

Later on in the story, during a conversation with Lady Aribella I missed the main clue, although Ruby came out and spotted it anyway. It could have been a bit more obvious or flagged up by a bit of flavour text. 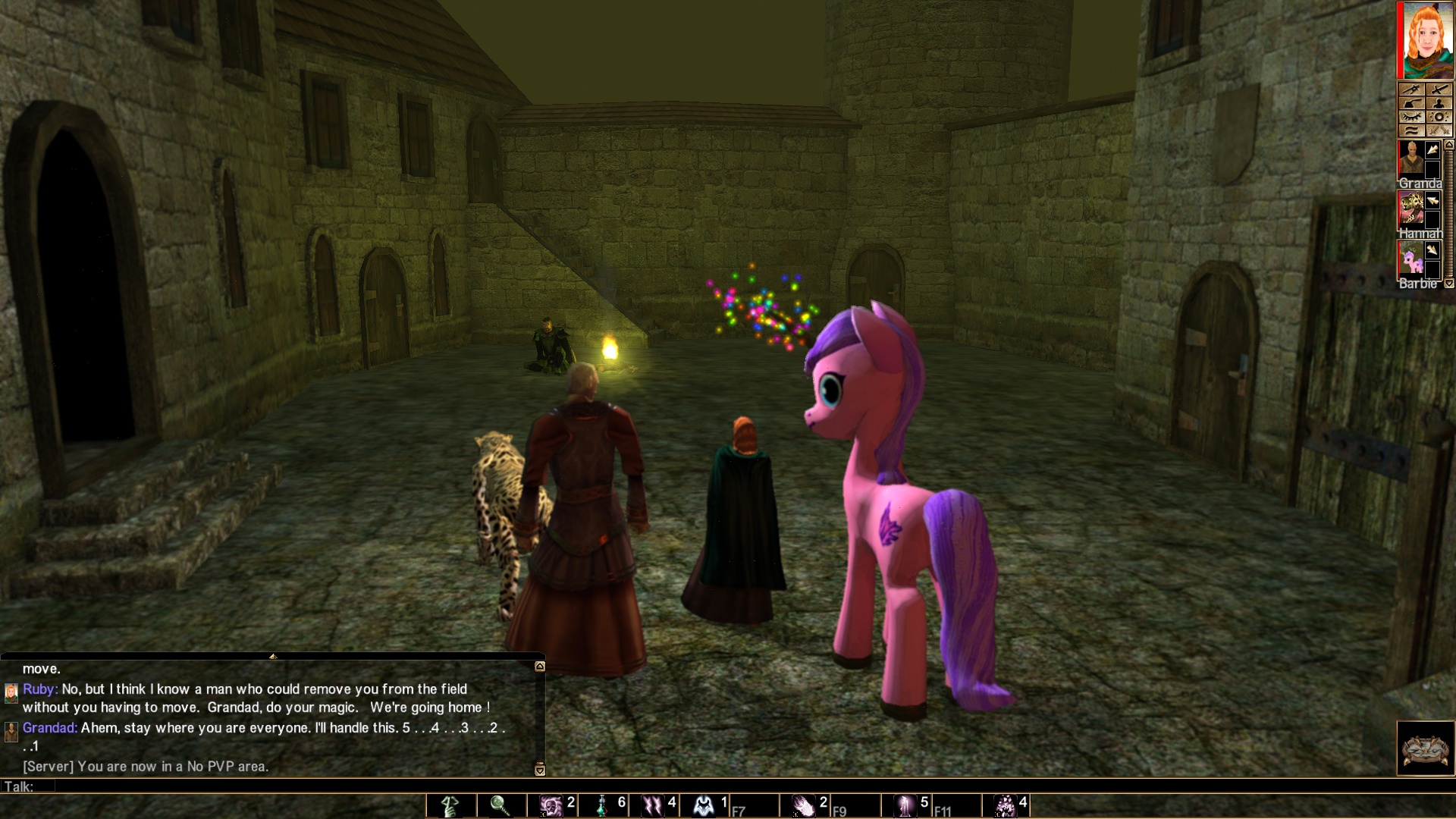 There was also a rather unintentionally humorous moment - aside from the intentional ones which are dotted around the module, largely arising from the discrepancy between Grandad's opinion of himself and Ruby's of him ! In an Inn, I managed to see off some hostiles during which a table was blown up but the tankards remained floating in the air . .  Just a weirdness of the game engine.

There is a chance later on to buy some goods at a village fair but the module doesn't go out of its way to encourage or give too many opportunities for this. I enjoyed spending some money at the fair, though.

A further note on the fair which uses the same village area as the previous night, except now bathed in sunshine with a good going fair. It was mildly jarring that permanent fixtures like fences in the market area had apparently been put up overnight. This could perhaps be solved by having more permanent placeables like fences in the market area be in place the night before when Ruby is going into and out of the inn.

The module is rounded off well with a final cutscene, giving youngsters the chance to enjoy a happy ending. 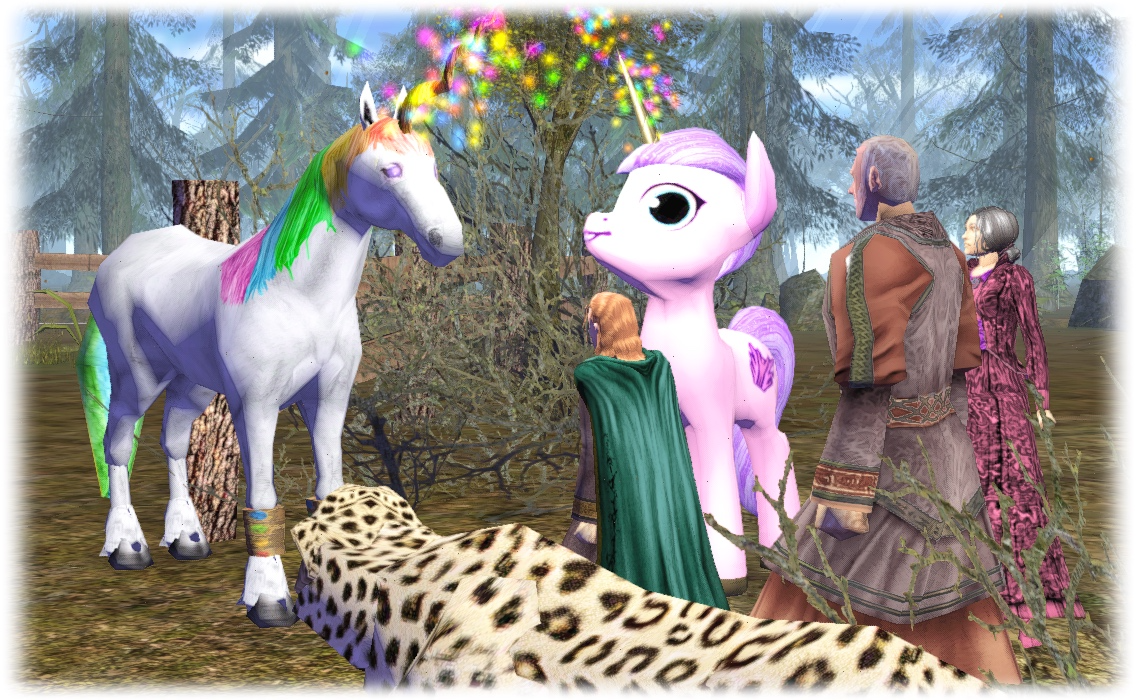 Overall, this module was a delight and one I really enjoyed playing. In terms of style-of-play, although Ruby, the author's real granddaughter, was apparently combat shy (which is perfectly understandable) I certainly am not. So the market allowed me to provide Grandad with armor, shield and sword. His spell-casting was hampered, but he was pretty aggressive about mixing it up in melee when the enemy got close. So, casting stone skin on him let him hold off the nasties while Ruby rained down long-range spells on them !

Indeed, it's really impressive what so many people have done over so many years to create the huge collection of quality community content. This module really shows off what can be done with the engine improvements Beamdog made w/ NWN:EE. I like the approach taken with the module, using existing reasources and focusing on creating a good story and game.

It's cool that he did this with his granddaughter. She's about the age of my brother's eldest daughter, and she is an aspiring computer wiz. I'll show her what has been done here with Ruby when I get a chance. I suspect it will definitely fire up her imagination and perhaps attract her interest.

These fall largely into the little niggles category and don't spoil the enjoyment of the module.  I've recommended to Jimdad55 that he maybe go back and update the few bits which caught my attention.

There are also quite a few assets to be downloaded for this module as the objective was to show off the game as it is now. However, because of this Jimdad's suggestion to use NIT is probably a good one to save you time.

This module was last updated in August 2022 and can be found on the Vault here.