Emitters are the basis for a large number of the visual effects found in the game.  Wether Whether it be the fire dripping from your magical sword, the water mists from a water elemental to the pyrotechnics of the most powerful magics. You will find emitters at their base.

So get to know your emitter, you'll be the better off for it.

An emitter emits two polygon squares which have textures mapped to them. An emitter with 100 birthrate emits 200 polygons. There is also the fact of longevity. I've not done any real tests to see if birthrate = that many particles existing at one point in time regardless of longevity or if that many particles are generated every X.X seconds and the longer the longevity period the more particles that exist at any one time.

Note: this content was rescued from the Wayback Machine's archive for http://ccg.animecafe.net/index.php?title=Aurora_Emitter

How to (by MerricksDad) [WIP]

A simple series of tutorials using OC content as examples.

Finally, lifeExp defines the time the particle remains in existence. In this case 1 second. Particles that reach the end of their lifetime will be erased, even if they were still opaque and large on screen. It's a good practice to make sure particles fade out proportionally with their lifeExp time unless you specifically want something else. In the case of Lighten blend mode, simply shifting to a black color (colorEnd) will do the same thing.

Finally, this particle uses a "Fountain" update with a birthrate of 30. Over the course of 1 second, 30 particles will be emitted from the 60x50 cm base rectangle.

If you examine this model further, you'll notice that the builder included multiple chunk emitters in the same model, each emitting different sized chunks. You can also use each emitter to produce different chunk types. For instance, one emitter could throw out bones, while another throws out gore. Or in the case of a placeable armoire, you might want to emit drawers, wood chunks, and clothing articles.

Emit A Trail of Smoke

Torches. Every adventurer needs them, right? But if you want a realistic torch, it won't just emit light and fire, it will also emit smoke. Above we had a nice flame effect which stayed in place with the object parent. A torch has this too, but a torch should trail smoke as the parent object moves. There are two ways of doing this. 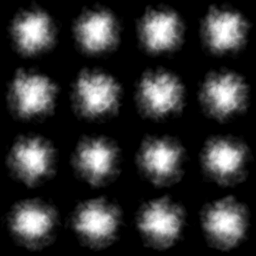 If you look at this texture (fxpa_smoke01), it's just a white image. Here I've shown just the alpha channel instead. You'll also note that the texture is twice the quality of the flame texture above.

Another possible way of emitting smoke is via a trail spawntype 1. In that scenario the emitter produces puffs of smoke only when the object is in motion. The emission rate is set to X per meter instead of X per second. You can imagine this is not great for torches because emission would halt if the parent unit stops moving.

If you don't want a specific emitter to blow out at that time, you can set its birthrate to 0 at that particular time.

Emit Particles And Suck Them Up With Gravity

Notice that the reference node orientation is also 0 0 0 0 aka "undefined". It will inherit it's orientation from the parent, which gets it from the emitter node, which in this case is also not specified, so it will get it from the spell which places the effect. In this case, the spell "Implosion" puts the VFX on the floor and points it upward.

Emit Particles And Project Them Toward A Point

This effect is paired with inherit_local, which makes particles stay at a position relative to where they were originally spawned.

Emit A Particle Under The Caster (Aura or Burst)