Each area will reference a line in loadscreens.2da. You may also force a particular load screen from this 2da or a raw file with SetAreaTransitionBMP.

There are 2 files used for load screens. The first is "filename" (commonly ls_filename) used by the game and also previewed in toolset. There is also a "small" preview version used by the toolset called filenames, eg: ls_tnc_01.tga and ls_tnc_01s.tga

The games default load screens are 512x512 sized TGA files. TGA retains quality compared to DDS. You can actually use any (square) size and the model that loads it will automatically resize it. If you want to support higher quality load screens you could increase the size to 1024 x 1024 for instance.

It would be recommended if you go larger (for better GUI scaling and higher quality overall) to use DDS. This is not supported to be loaded in the toolset however so you could have a toolset-only TGA then a client/user high-quality DDS.

The load screen files look a bit weird though! Here is an example: 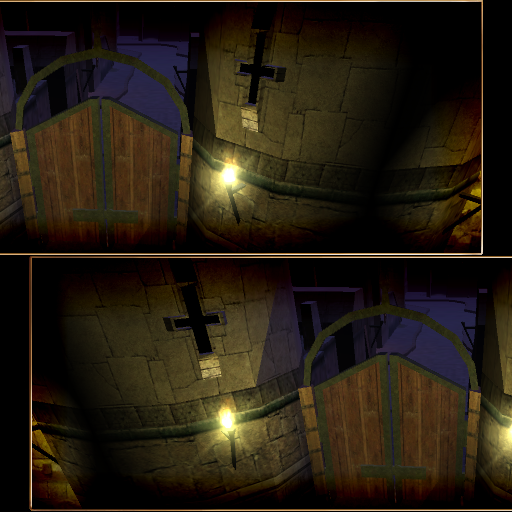 Obviously the image needs to be "letterbox" but you can't fit such a letterbox in so the image is split, overlapping in the middle. Bit odd for sure.

The "small" Toolset Preview one is super tiny, and has to be this exact size and in TGA else the toolset simply won't load it. The size is 128x64 pixels.

Some templates are available (cribbed from this vault entry):

Note lines 0 and 1 are very likely hardcoded and cannot be changed, and relate to the SetAreaTransitionBMP function.