Moves, or video files, can be included in a hakpack file and played at the start and end of a module (not during it, there is no arbitrary script command to play a movie).

The movie format is the propitiatory BIK format. There are limits in resolution (800x600), FPS, and audio quality and type.

Movies were changed to more open video format WBM (renamed .WEBM files, the game does not support 4 letter filenames). This consists of a VP8 video file and Vorbis (Ogg) audio. The movie resolution and FPS can now be arbitrary (eg; widescreen) since 8193.13, rather than the original games 800x600 30FPS limit. Movies also scale properly.

Notably the change in movie format will not load older .bik movie files. The original game (and premium module) movie files are converted.

Example settings to use on a VLC encoder from jimdad55 (other settings may work but these are confirmed to work): 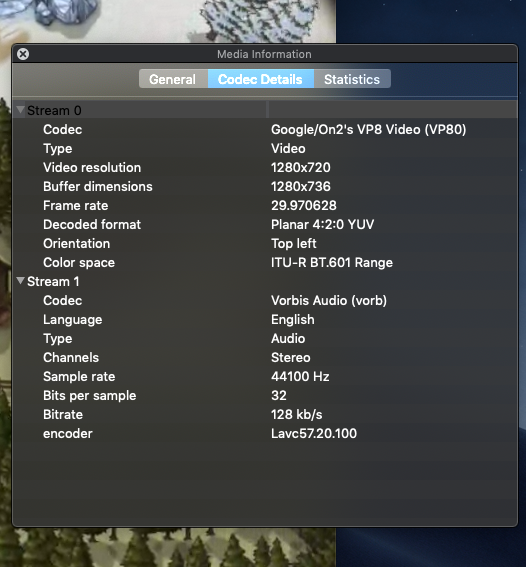 Setting a Movie to Play

There are to instances of movie usage, the Module stores the Starting Movie. This appears to have some kind of per-game (not even per-character/per-playthrough) setting where it is set to have been seen (at least testing the default prelude). It's unknown if the movies also skip in custom modules (something to test).

Default movies can be see in the main menu for the OC, NWN:SOU and NWN:HOTU along with the intro and credits. These are hardcoded - custom movies outside of this are unplayable in the main menu. 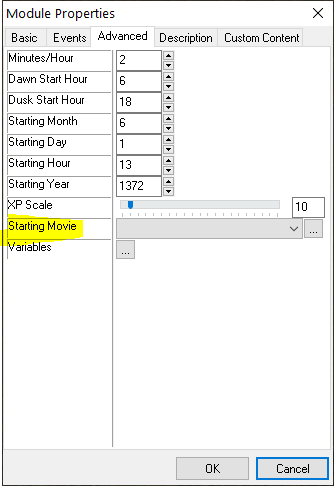 This is scripted using EndGame with the title of the file to play. It ends the game (kicks back to main menu) after playing the end movie plus default credits (not your own module credits, alas, the Bioware ones!) but since it accepts a parameter you can do:

So how come the OC has several movies? Even in the same chapter?

Well it basically cheats with preludes and end parts of chapters being entirely different modules. You can do the same:

You can't really transition around modules for a SP campaign easily but a linear set of adventures this can work relatively well.

Subtitles are not supported by any version of the game. They are usually added to the video files themselves, as shown by the default OC movies.