CEP 3.04 is currently in development and has not been released yet.

Expected release will be around the time that NWN:EE patch 35 goes live.

The following new damage types has been added, this is also for resistances and immunity types, you can look at the .2da for reference when scripting.

Reference .2da can be found in the cep3_2das.hak and the .2da file itself is called iprp_damagetype.2da you can also look at the sheet below. 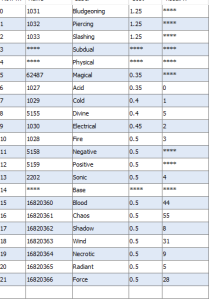