Today is the day for a new development patch, and it is a big one. Please test it thoroughly, as we intend this to hit stable in the coming weeks!

This patch is compatible with the current stable (8193.13), so you can play on servers with it that have not yet upgraded. However, some of the new features will not work on servers. To get the full experience, you will have to update both server and clients to this patch.

This patch includes a new enhanced lighting engine, that is governed by the same principles as you would see in other modern games that aim for realistic lighting. The aim is both to allow much higher quality future content, but also in large to enhance the visual quality of existing content.

The blue dot in the middle can slide left and right to compare before/after. The left side is the old/current render; the right side is the new lighting engine.

These are the main elements of this new lighting engine:

The lighting engine is by default on, but optional, as it is heavier on the GPU than the previous lighting model (especially if you run with 32 lights, but a minimum of 16 lights is recommended). You can turn it off in the Options menu. You can also tweak various parameters of the new lighting engine, such as attenuation and falloff. We would suggest leaving them at the defaults though, to ensure uniform content presentation.

Note that since the new lighting engine constitutes a significantly different way of computing light interaction and behavior, it is inevitable that overall illumination levels in some areas will change, which can result in certain areas becoming too bright or too dark. We have been carefully tuning the various parameters to minimize this effect, but ultimately, moving toward more realistic and sophisticated lighting will always come with this trade-off. If you find that the game has become too dark or too bright, we recommend that you adjust the brightness level by using the gamma slider accessible in the graphics options.

Water presentation has also been improved significantly. It now renders full dynamic light reflections, including sun and moon. It also shows wave displacement based on area wide and local wind sources (such as explosions) much more realistically than the previous water did.

As with the other lighting changes, some areas may appear differently, and builders using tile lights will now see them in the reflections, and may wish to edit an area’s lights so that both the area and the reflections appear as desired.

There are configuration options in the UI to turn this feature off.

Again, please visit this link to see the improvements to water in action: https://nwn.beamdog.net/web/8193.14-comparison-shots/

The comparison link posted above has visual examples of this.

Grass rendering also has been heavily optimised and should no longer pose a performance consideration, even in scenes with lots of it.

Models spawned by visual effects now have fog properly applied and are not self-illuminated with a bright light anymore. This makes content spawned as visual effect render identical to other in game content, making things such as VFX spawned tiles and character equipment appear more natural.

This patch includes all content from Darkness over Daggerford and Tyrants of the Moonsea, except the Rural Forest and Winter tileset facelifts by Zwerkules.

Players can now acquire and relinquish DM privileges during normal play, assuming they know the DM password. A player DM will have all of the normal dungeon master ruleset amenities: Their player character will turn invincible; they will be able to cast any spell they wish, and their skill checks will always be made against max.

However, player DMs will not gain features specific to DM characters: Their feat list will not include all the DM abilities, and they will not walk any faster. They will also not join the DM party/faction, so they will not be able to see all player parties.

Dedicated servers can turn this off in configuration.

There is a new script command that can be used to distinguish between player DMs and “real” DMs:

As a consequence, GetIsDM() will now return TRUE for player DMs. Previously, you could rely on this being static per-connection, as true DMs could not drop their privileges.

Pathfinding quality in placeable and creature-heavy areas has been significantly improved, beyond the optimisations already done in 8193.13.

Your character should no longer get stuck on random placeables, or not find their way around other creatures.

You can now specify script parameters in the toolset conversation editor, and these parameters can be queried via new the new script command:

There is also a script command to set parameters when invoking other scripts via ExecuteScript.

Full access to the sqlite API has been added.

To get you started, please check INSTALLDIR/lang/en/docs/SQLite.txt for a short introduction and further documentation on the newly-added script commands.

Please note: This is an advanced feature, and requires a solid understanding of SQL to make robust and effective use of.

You can now trigger cursor targeting mode from scripting:

A new module event has been added to support this.

Caveat: The toolset cannot currently configure this module event. You need to set it via SetEventScript() at module load.

You can now override the mouse-over (“hilite”) colour on objects.

You can now override the mouse cursor a ingame object presents. Additionally, mouse cursors have been unhardcoded, so you can add more via custom content (see MOUSECURSOR_CUSTOM_00).

You can now replace individual textures on objects at runtime

Walk animations have been unhardcoded

The game now allows much finer-grained scripted control over the wind data.

Visual effects can now refer to PLT textures. The layer colours/indices are inherited from the object the effect is applied to (such as creatures).

Visual effects can now be scaled, rotated, and translated

When applying a visual effect, you can now scale, rotate and translate it, in relation to the parented object. The script commands have been extended to support this:

Modules and HAKs can now contain more than 16k items

The game can now load more than 16356 resources from ERF containers (modules and haks).

The game options UI has been replaced with a new implementation that now allows access to all of the new configuration options. The “Debug UI” configuration tab has been removed as a consequence.

This UI is still work in progress, but it is useful enough to include now in the development patch.

Debug UI has been revamped, including a new NWScript evaluation helper 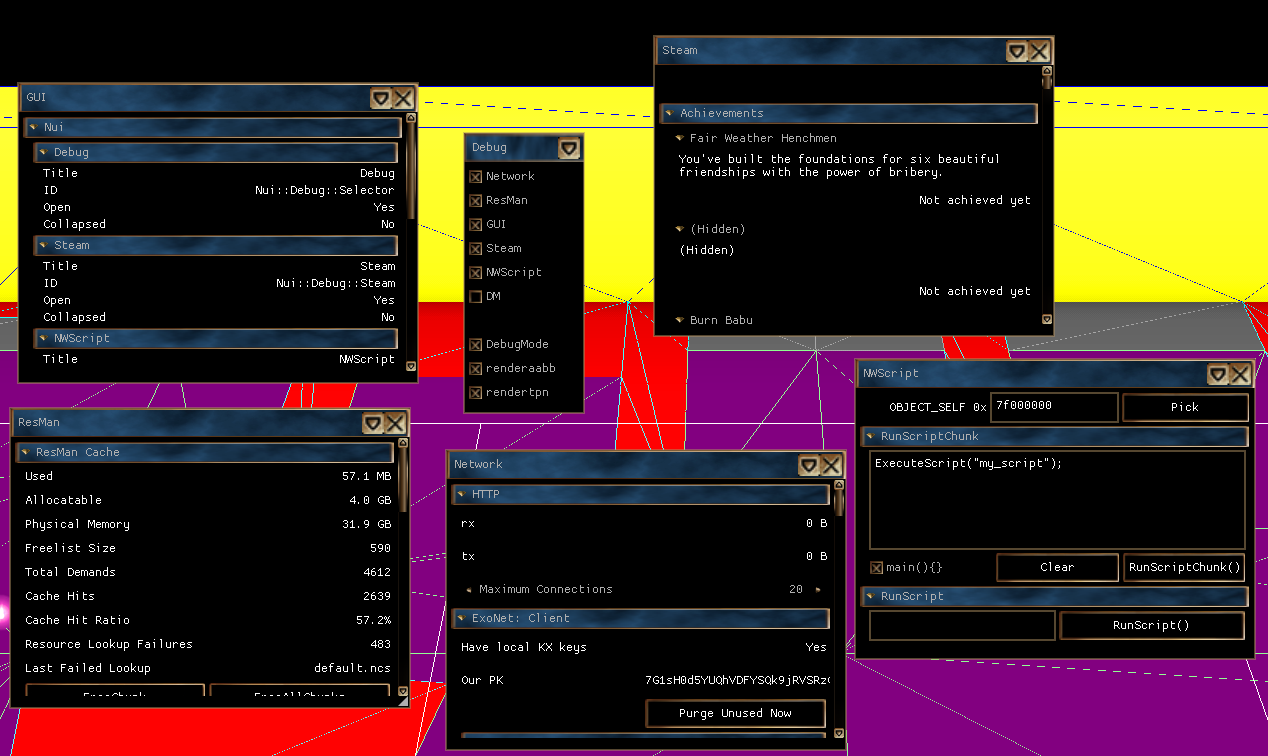 The debug UI has been rewritten to be leaner and expose more useful features. You can now toggle DebugMode, renderaab, rendertilepathnodes via checkboxes.

A new widget has been added that allows evaluating NWScript snippets on the running server (assuming you have DM privileges, or are in DebugMode). 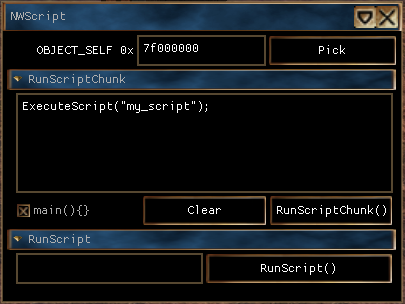 Local variable access on objects is now O(n) in the worst case, but usually significantly faster than that. This is especially noticeable when you have thousands of variables on a single object. Previously, this could take up to 500ms to read a single variable; now access is below 10ms in these scenarios.

The StringToObject() script command can be used as the reverse of ObjectToString().